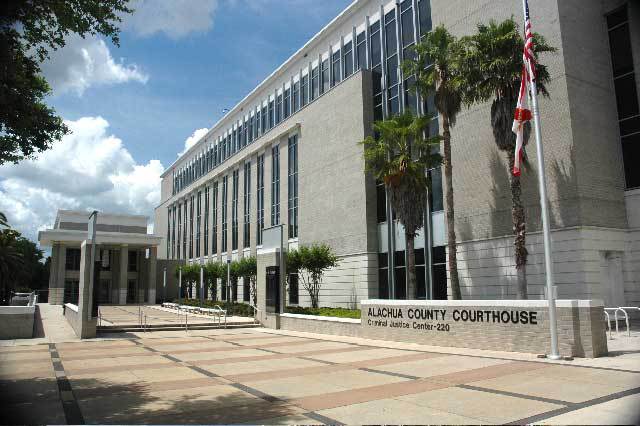 Do you need to get someone out of jail in Alachua County? Call Roundtree Bonding Agency at (352) 376-6645. Owner Rick Roundtree has been a licensed bail bond agent in Gainesville since 1978. Agent Sean Thomas has been writing bonds since 1996. Call us today to find out more about us or about the bail bond process in Alachua County.

What Happens When Someone Is Arrested In Alachua County?

When someone is arrested in Alachua County, they’re taken to and booked into the Alachua County Jail, located at 3333 NE 39th Avenue. If a person is arrested on a warrant with a bond endorsed on it, they can choose to bond out right away. But, often there is no bond on a warrant. The person would then have to see a judge at 9 a.m. the next morning at a hearing called “First Appearance.”

Most people arrested in Alachua County are incarcerated after what is referred to as “on view” arrests. This is when a law enforcement officer has witnessed a crime, such as drug crimes or DUI, or has reason to believe a crime has occurred.

At the first appearance hearing, a judge will (among other things):

If the defendant qualifies for a public defender, the judge will usually appoint one during the first appearance. The judge's options include:

If a monetary bond is set, it can be paid in cash at the jail, or a Gainesville bondsman can be hired to post it.

In Alachua County, once one of the c has been turned in at the jail, someone can expect to be released in two to four hours. If the bond is either denied, or you consider the bond set too high, the jailed person’s attorney can ask for a bond hearing. At a bond hearing, the judge might reconsider and lower the amounts or change the bond to a recognizance release. If the defendant is granted a recognizance release, they’re promising — in writing to the court — they’ll appear at all upcoming court dates. Should the defendant break this promise and not appear in Alachua County court, they are subject to immediate arrest. The defendant also likely loses the option for a reasonable bond amount in the future.

If you consider a bond to be too high for you to pay a bondsman all at once, the Gainesville bondsman may be willing to set up a partial credit plan and let you make payments.

If you are asked to cosign on a bond, understand you are risking the full amount of the bail bond liability. Cosigning also guarantees to the bonding company in Gainesville — who is, in turn, guaranteeing to the courts — that the defendant is going to make each court appearance until their case is over.

So, don’t cosign for a person’s bond on a whim.

While a bail bondsman has full arrest powers and can track down the defendant, you as the cosigner have no such powers under the law. For more see our FAQs.

How To Expedite The Bail Bond Process

If a friend or family member is being detained in the Alachua County Jail, here are some things that you can do to speed up the process for bail bonds in Gainesville.

Roundtree Bonding Agency was established in Gainesville in 1956. We've been writing bonds in the counties of north and central Florida longer than any bail agent in this part of the state. In that time, there has never been a complaint filed with the state against the company or any of the agents who have worked for us. Over a 59-year period, that is an amazing legacy. To learn more about Roundtree Bonding Agency or Alachua County bail bonds, contact us today.